A positive iron mould for a short jian (two edged sword). Positive metal moulds were used toward the end of the Warring States period for mass-producing bronze coins. The positive mould was used to mass produce negative clay moulds. The clay moulds were then used for casting the bronze coin (or weapon as in this case). This is the only example I can find of a weapon being produced that way. The weapon is attributed to the minority Hun tribes of inner Mongolia and can be seen in “Weapons In Ancient China” by Yang Hong on page 140 (figure 204). This mould appears to be the exact one used to cast the weapon referred to in the text. 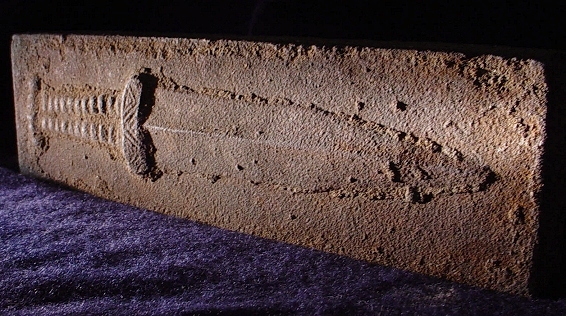 A nice sword for this site, is a rare piece from the Warring States period with a decorated hilt, rings and pommel. I also have the remnants of a scabbard for this piece that I am currently treating for preservation.

A very rare bimetallic bronze sword that was unearthed in Anhui provence. It dates to the Warring States period and is an impressive 63 cm long. It weighs in at 797 grams. These swords were cast in several stages and this one has a softer core of higher copper content for increased tensile strength and edges with a higher tin content to hold a sharper edge.Swords like this one were generally crafted for very important or high-ranking individuals.

A bronze “dadao” or broad sword dating to the Shang dynasty (1600-1100 B.C.) The weapon is 28.5 cm in length and 3.5 cm in width with three sockets or perforations along the dorsal edge and 16 ornamental studs placed longitudinally along the blade. The weapon would have been attached to a wooden pole via these perforations and is one of the rarest types of Shang dynasty weapons. This particular weapon has sections of bronze showing a nice golden hue while other sections show a distinct green malachite patina. There are wood fibers embedded in the corrosion in each of the three sockets that are remnants of the original pole. (For a similar reference see Hong, Yang : “Weapons in Ancient China” pp. 52-54 and color fig. 11)

Very rare and completely intact iron sword (jian) with a “cast on” bronze guard dating at least to the Han dynasty and probably as early as the Warring States period (475-221 BC). The sword measures roughly 114 cm in length and has remnants of the wooden scabbard embedded in the corrosion. It is very rare to have any iron implements last over two thousand years because of the inherent instability of the metal. This piece is exceptional not only for that reason but because of its uncommon length. Although a very few similar swords have been found that are longer than this, (up to 1.4 m) most are considerably shorter and the ones I have seen rarely exceed 83 cm. with only one example measuring 104 cm.

Massive bronze sword found in Anhui province ,dates to the Spring and Autumn period (770-476 BC). This completely intact specimen has a lustrous green malachite patina and measures 68.7 cm in length. The cross guard is 5 cm wide and the pommel area is 2 cm wide. There is a distinct difference in the metal along the edge of the sword as opposed to the metal in the middle of the blade. Ancient Chinese bronzesmiths recognized that the edge of the sword needed to be hard to retain its cutting power while the bulk of the blade needed to be able to flex to prevent breakage. Thus the sword is a composite casting with the metal on the edge of the blade having higher tin content and a lighter color than the metal in the center of the blade. For a nearly identical specimen, see “Weapons in Ancient China” by Yang Hong p.112 fig 158. 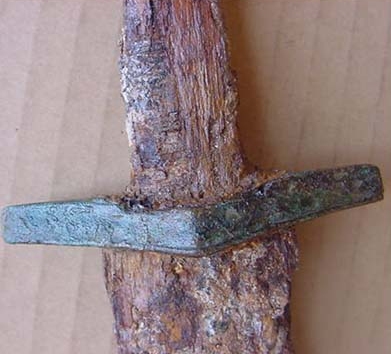